In the Corn Belt, which covers much of the Midwest including Kansas, corn is an integral component to the success of agriculture. Throughout the growing season, the corn plant undergoes a series of developmental stages as it grows from a seed at planting to a tall plant with an ear at harvest. The following information highlights various stages of growth and development of corn throughout the growing season and various problems during planting and germination.

It is important discuss seed placement at planting before we reach plant growth. 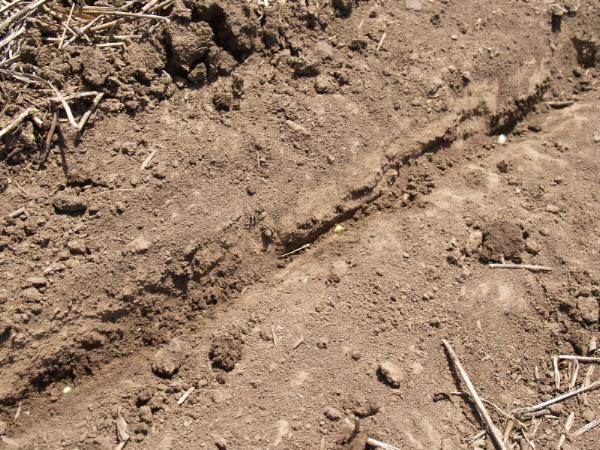 Another factor that is important before seedling emergence is residue management when no-till systems are implemented. Pictured here are two rows with varying amounts of soybean residue. 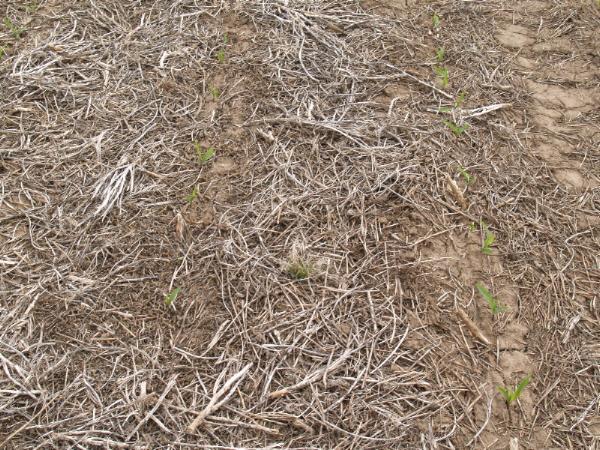 The left row has a higher amount of residue covering the row compared with the row on the right. Due to this, the left row has a less uniform stand. This is due to cool soil temperatures as the residue inhibits penetration of heat from the sun. Residue will not only further delay emergence, but can also cause uneven stands, which can also decrease yields. Management of corn or sorghum residue is more critical due to the higher amounts that remain in the field compared to soybeans.

Soil moisture also requires consideration at planting. While moisture is important to consider during planting, doing so when the soil is too wet can cause crusting. 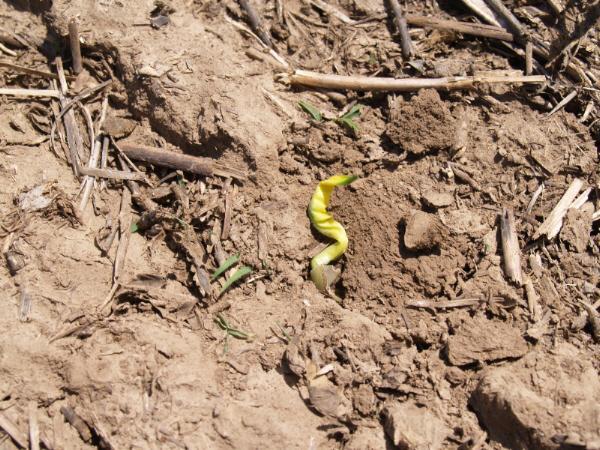 Crusting occurs when water and pressure causes soil particles to "glue" together, creating a layer that is very difficult to penetrate. In this photo, a large clod was removed from the surface, revealing this plant. The yellowness of the plant illustrates its clear deficiency for sunlight. The likelihood of this plant surviving at this point is low. In the event of crusting occurring in the field, rainfall is usually the best method to solving the problem. However, rainfall can also cause crusting to occur if the rainfall intensity is too hard. 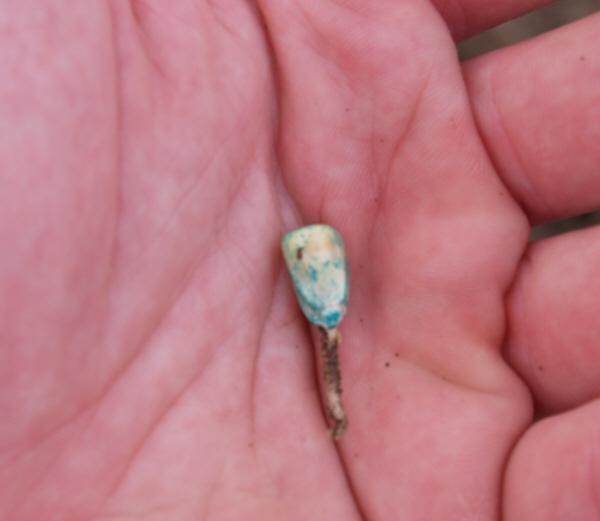 Now that the seed is in the soil, it will begin to absorb water and begin to swell. When enough water has been absorbed and the soil temperature is favorable, germination will occur. The first root called the radicle will then emerge.

The picture illustrates the radicle beginning to elongate, approximately ten days after planting. Soon after emergence of the radicle, the mesocotyl will begin to elongate. 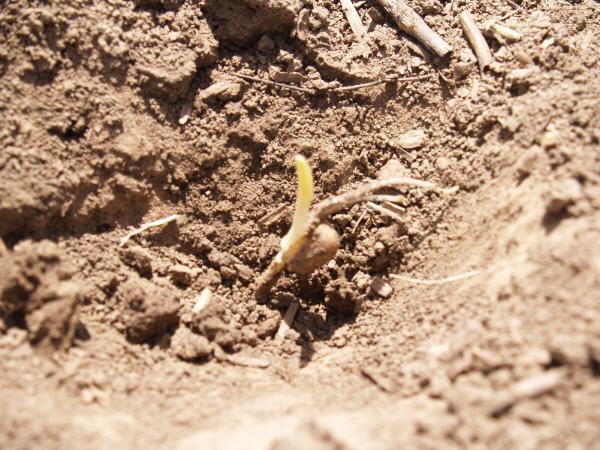 The coleoptile, which is a protective sheath over the mesocotyl, is seen first when emergence occurs. 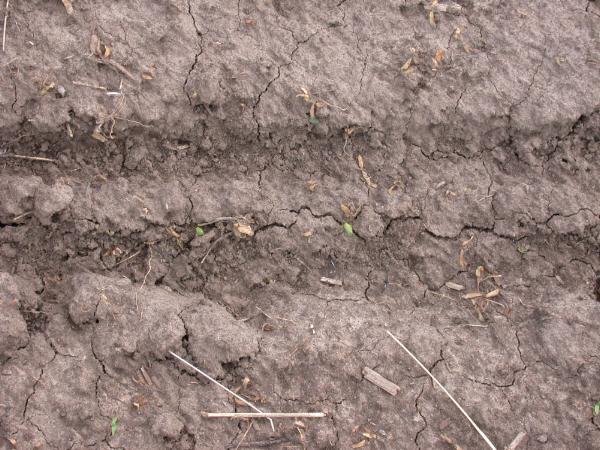 Pictured in this photo are coleoptiles breaking through the soil surface.

From breaking through the soil surface to maturity, the plant will undergo several growth stages. These stages are separated into two groups: vegetative and reproductive. The point that separates these two groups is the appearance of silks. Listed below are both groupings and their respective stages. 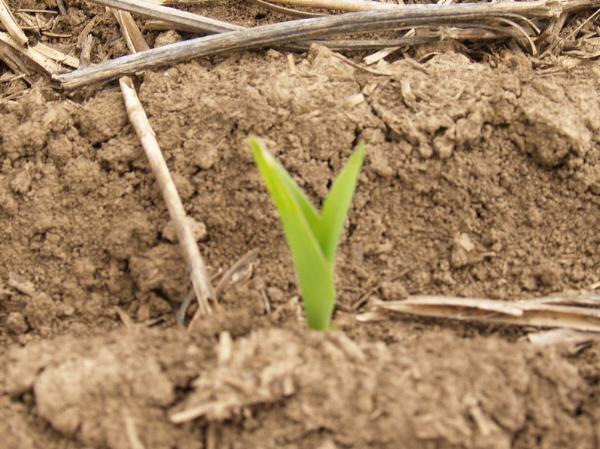 The first stage observed in the vegetative period is known as VE, which is emergence. At this period, the coleoptile is fully visible, yet no leaves are fully developed.

Full development of the first leaf is known as V1.

The number of leaves that are completely developed determine the vegetative stage the plant is at.

Although there are two leaves present on this plant, it is technically not at stage V2. Full development is achieved when the collar of the leaf is fully visible. 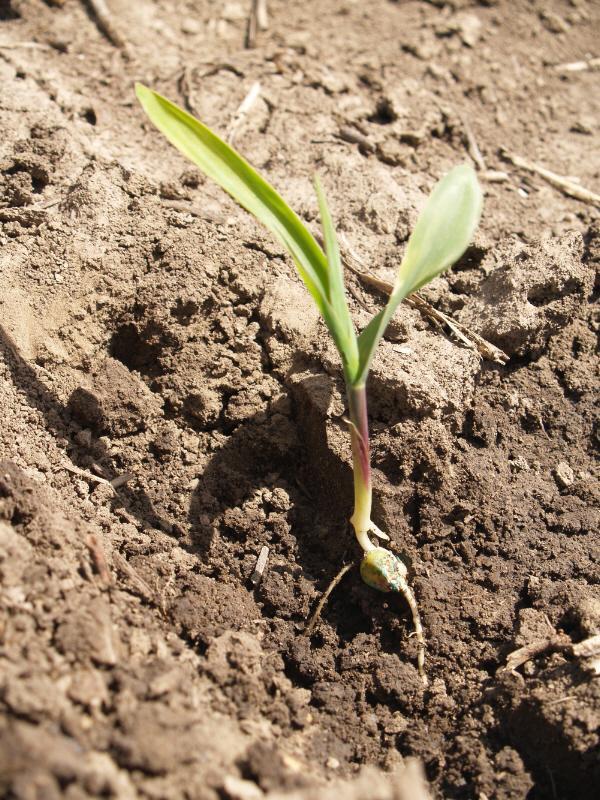 The collar is found at the base of the leaf. This will be explained in further detail at a later stage. Another attribute of this stage is the uniqueness of the leaf. 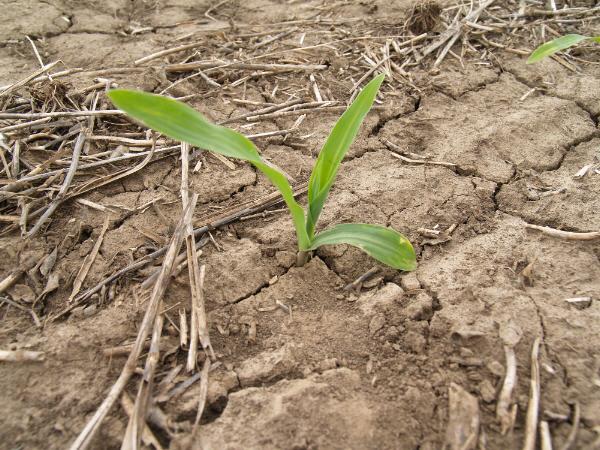 To illustrate V2 and to establish a better understanding of the leaf collar, please examine the following two pictures. 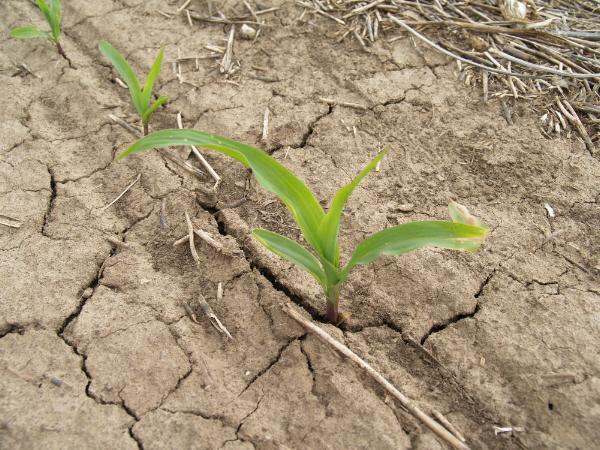 While these two plants look similar, they are not at the same growth stage. The first plant would still be considered V1, while the plant in the second picture is V2. Zooming in will aide in the investigation of the differences. 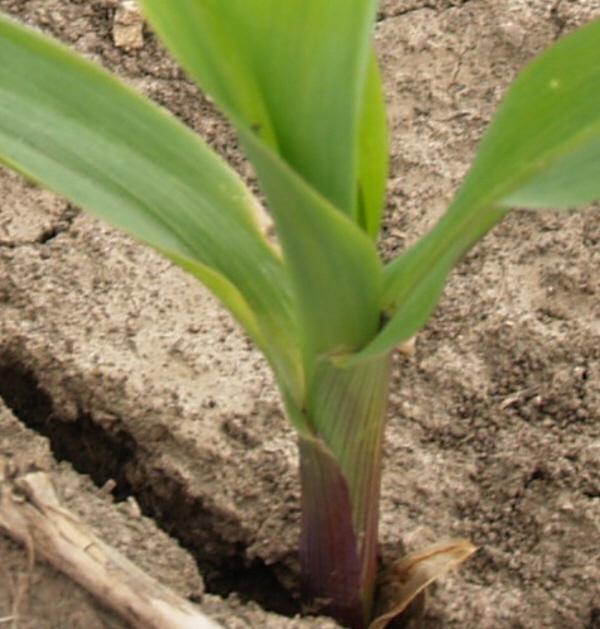 This photo reveals the collar of the V2 plant from above. After zooming in, the image reveals the collars of the first two leaves. Despite a very large second leaf, on the plant in the first photo, the collar is not fully exposed. However, this plant will reach V2 shortly hereafter, probably within 24 hours. 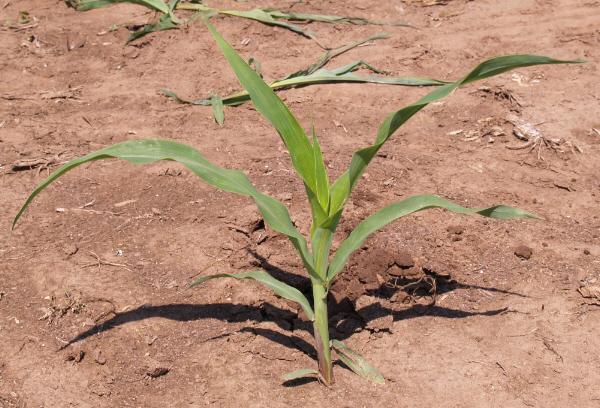 At this stage, the growing point of the plant are now above the soil surface. Tillers also start to become visible at this stage. Also, leaf senescence, which is the process of degradation and death, begins to occur to the first leaf. 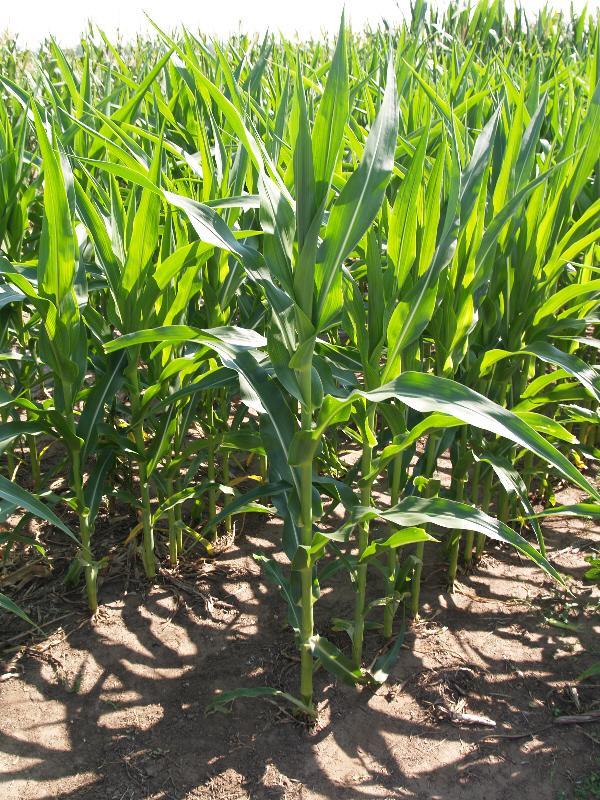 At this stage, many ear shoots, which are the potential ears, are now visible on the plant. Usually, the ear shoots that are located higher on the plant are those that will develop into harvestable ears. Nutrient and dry weight accumulation also increases greatly around this time, which results in greater water and nutrient requirements. 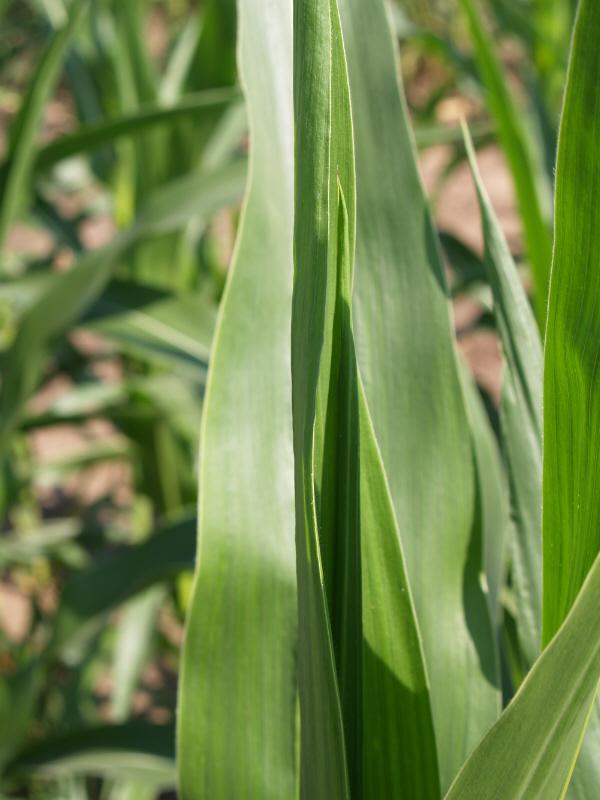 Tassel formation is now starting to become visible at this stage, as shown in the photo to the right.

This stage occurs when the tassel is completely extended and silks are not yet visible. This stage also signifies the amount of vegetative growth that will occur on this plant, as all leaves that will be grown on the plant are now visible. The tassel will usually be visible for 2-3 days prior to the silk emergence, depending on the hybrid and environmental conditions.

Pollen shed will now occur from 2-3 week. The plant is most vulnerable to hail damage at this period due to the tassel being completely exposed and possibly destroyed if hail were to occur. 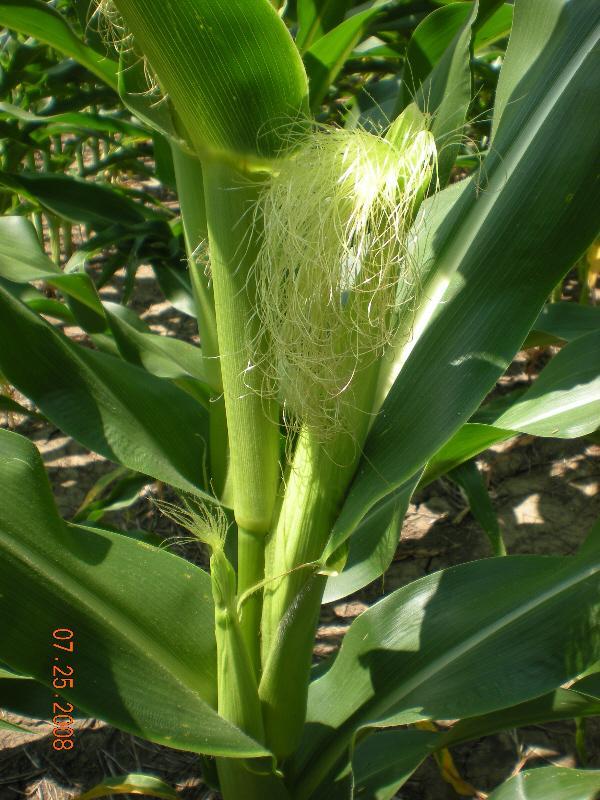 This stage occurs when silks are visible outside the husks. The silks serve the purpose of capturing pollen that falls from the tassel. The captured pollen grain moves down the silk to the ovule, where pollination occurs. This process takes about 24 hours.

Environmental conditions are very important during this growth stage. Stress during this time can cause poor pollination or kernel set. Lack of moisture can cause the silks to become too dry and can greatly limit their ability to transfer pollen. 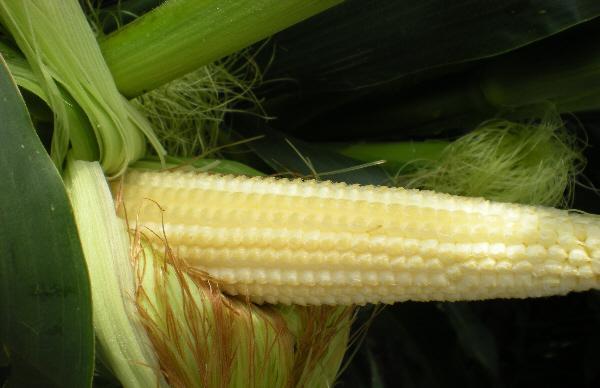 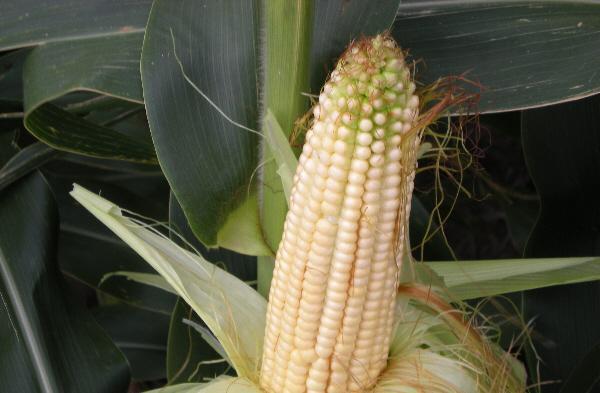 Kernels now begin to show a yellowish color on the outside. Also, the inner fluid now has a milky texture, which is caused by accumulating starch. The cob also also gained a considerable amount of size and volume considered to it at R2.

Dry matter accumulation is occurring at a very high rate now. Any stress that occurs during this stage can limit kernel size and weight. 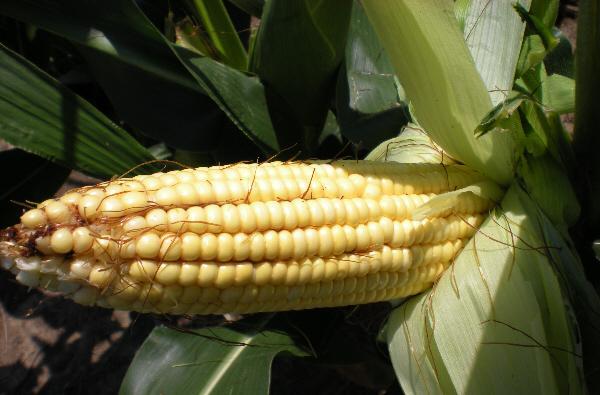 The ear now begins to display a brighter yellow in color. Also, the accumulated starch in the kernel begins to thicken from its earlier milky consistency. The cob also begins to develop a reddish color. 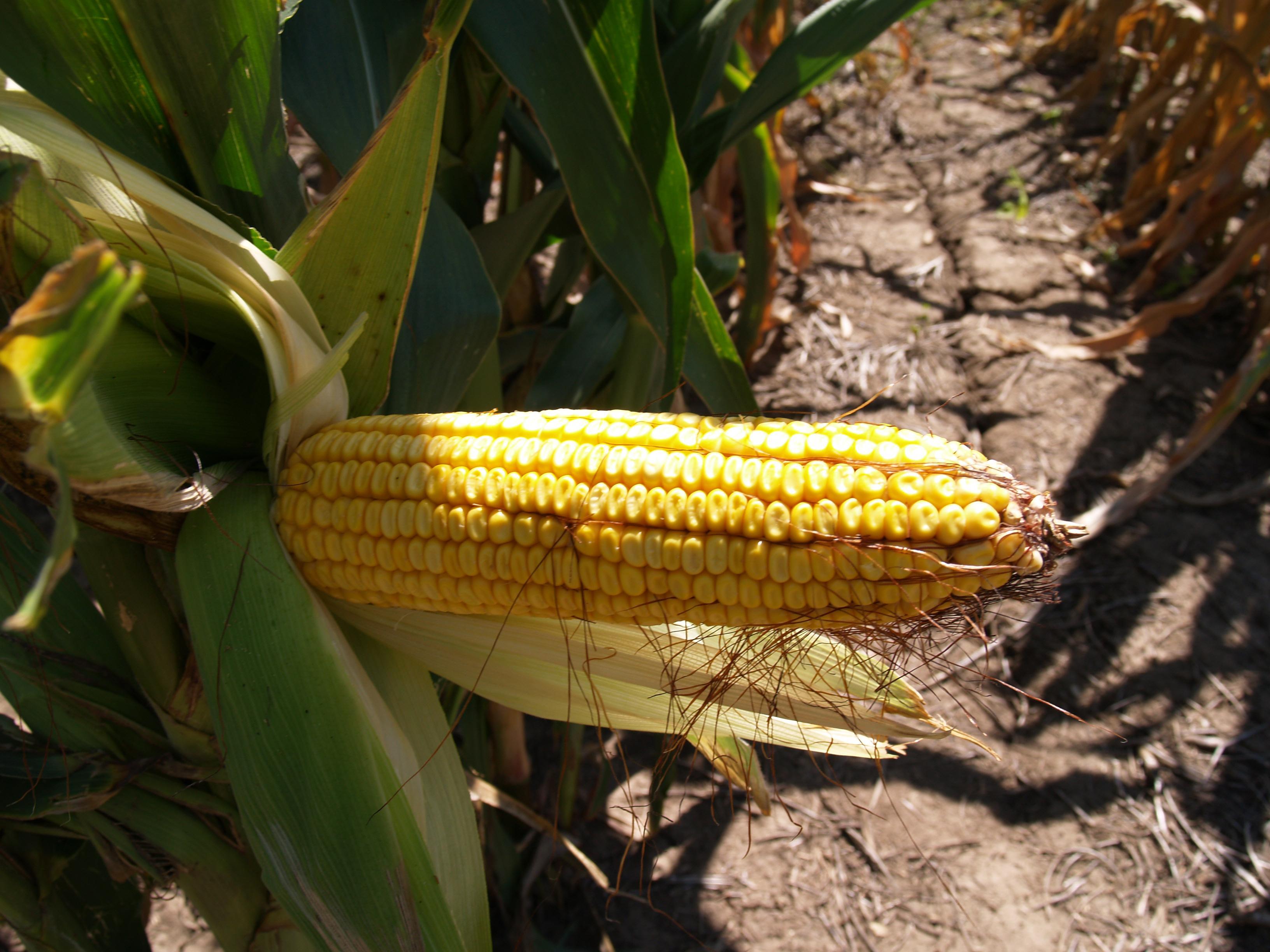 This stage is easily visible, as kernels are now dented. This occurs as the moisture content of the kernel begins to decrease at a faster pace. At the beginning of this stage, the kernel will be about 55% moisture.

The starch in the kernel continues to evolve from the pasty consistency of the dough stage to a much harder texture. This starch will begin to harden at the top of the kernel and work down towards the cob.

Stress at this stage will only affect kernel weight. An early frost during this period could also have the same effect. 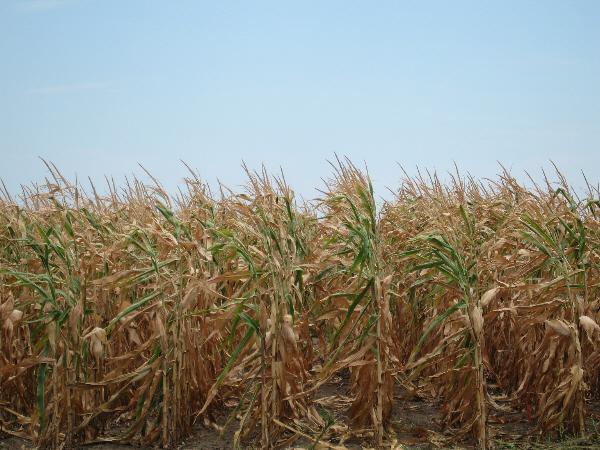 This stage occurs when the kernel has achieved its peak dry matter accumulation. The hard starch layer has now reached the cob and a black abscission layer, called the black layer, has now formed. This black layer signifies the kernel is finished with its growth for the season. The kernel at the start of this stage is 30-35% moisture, depending on the hybrid and environmental conditions.

The growth rate of a corn plant is slow at the beginning of the season, but increases with the presence of each new leaf. Under non-stressful conditions, the time between new leaves will decrease as the season progresses. The plant is most vulnerable to stress during silking, when important pollination events are occurring.

As the reproductive stages progress, the effect of stress on seed weight will decrease, while the effect on seed number will be minimal after R2. Highest yields will be achieved in areas where environmental conditions are favorable for these growth stages, especially R1. Unfavorable conditions early in the season will limit leaf size, which will decrease photosynthesis, while stress later in the season can affect pollination in the form of kernel size and number.