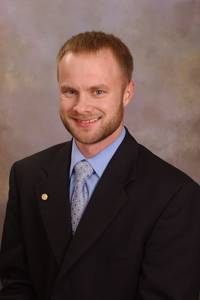 Michael Stamm is an agronomist and canola breeder in the Department of Agronomy. He received his B.S. degree in Agronomy and his M.S. in plant breeding from Kansas State University. He began his career as a breeding associate with Monsanto for two years. Since 2005, he has directed the canola breeding and research program and the National Winter Canola Variety Trial. The overall objective of his program is to improve adaptability and performance of winter canola in the U.S. Great Plains and other regions. Under his leadership, six conventional and five Roundup Ready® winter canola varieties have been released and licensed for commercial production. His program has recently expanded into winter canola hybrid parent line development.

Through participation in the Great Plains Canola Association and the U.S. Canola Association, Mr. Stamm has been instrumental in helping secure crop insurance, a regional market, and other risk management tools for Great Plains canola growers. Through these partnerships, Mr. Stamm and the canola research team coordinate production schools, field tours, and field days throughout the growing season. These activities have resulted in greater planted canola acres in the region.

In addition, coordination of the National Winter Canola Variety Trial (NWCVT) is a significant activity of the program. The NWCVT was established to permit testing of commercial varieties and advanced experimental lines and hybrids in a wide range of geographic settings. Information obtained from these trials helps seed developers determine what experimental products should be released as new hybrids and varieties and where those varieties can be profitably marketed. Producers use the information to make informed variety selections.