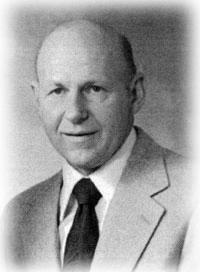 Raymond V. Olson (1919-1985) was born in North Dakota and earned a B.S. degree from North Dakota State College and M.S. and Ph.D. degrees from the University of Wisconsin. He came to Kansas State College as an Associate Professor of Soils in 1947. During his time as Head, the Department greatly expanded its faculty and graduate programs; initiated new programs in soils, genetics, and soybeans; replaced its facilities after a devastating fire in 1957; and received numerous awards for its contributions to Kansas and U.S. agriculture.

Olson was the first Chief of Party of the KSU-AID program at Ahmadu Bello University in Nigeria and later served there as Dean of Agriculture and Provost for Agriculture and Veterinary Medicine. He was Director of International Agricultural Programs at Kansas State University from 1970 to 1972.