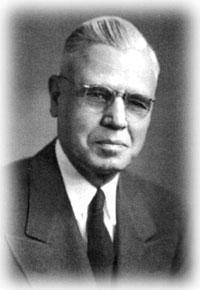 Ray I. Throckmorton (1886-1979) was born in Pennsylvania and received the B.S. degree from Pennsylvania State College and the M.S. degree from Kansas State College and did advance study at Cornell University. He joined Kansas State College as an Assistant in Soil Survey in 1911. As Head, he oversaw development of several new Experiment Fields; completion of a number of county soil surveys; release of many new varieties of wheat, corn, oats, and sorghum; and guided the Department through the years of depression, drought, and World War II.

He was President of the American Society of Agronomy during 1934. Throckmorton was Dean of Agriculture and Director of the Kansas Agricultural Experiment Station from 1946 to 1952. He also served as Chairman of the Athletic Council, President of the K-State Endowment Association, Consultant for the USDA, and Committee Member for the Association of Land Grant Colleges.