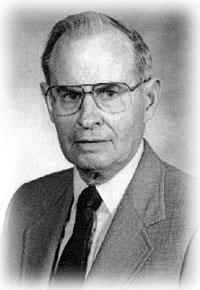 Hyde S. Jacobs (1926-____) was born in Idaho. He earned B.S. and M.S. degrees from the University of Idaho in 1952 and 1954, respectively, and the Ph.D. degree from Michigan State University in 1957. He joined Kansas State University as Assistant Professor of Agronomy and, subsequently, directed the Kansas Water Resources Research Institute and Kansas Evapotranspiration Laboratory.

During his tenure as Department Head, construction of Throckmorton Hall Phase I was initiated, the statewide network of Area Extension Agronomists was completed, and private funding for crop improvement research was enhanced. Jacobs was Assistant Director of Cooperative Extension and Director of International Agricultural Programs from 1981 to 1986 and Assistant to the Dean of Agriculture from 1986 to 1995. He was legislative liaison for the Kansas Agricultural Experiment Station and Cooperative Extension Service and coordinated projections of teaching and research needs by an Agriculture 2000 Committee of distinguished citizens.