Coach for the team is Mickey Ransom, professor of agronomy. The assistant coach is Kim Kerschen, agronomy instructor and academic coordinator.

The contest is an activity of the American Society of Agronomy and the Soil Science Society of America. Twenty-four teams from all over the U.S. participated.

The Soil Judging Team was coached by Mickey Ransom, professor of agronomy, and assistant coach, Kim Kerschen, instructor and academic coordinator in agronomy.

The Soil Judging Team traveled to Grand Rapids, MN to compete in the Region 5 Soil Judging contest held by the University of Minnesota. The team performed well and placed 3rd overall. The 2015 contest was held from September 20 - 25.

The 2016 National Collegiate Soil Judging Contest will be held in Manhattan, from April 3 – 8. 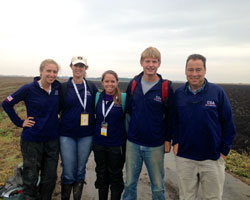 MANHATTAN, Kan. – Team USA took first place overall at the International Soil Judging Contest in Gödöllo, Hungary held Sept 1-5. The contest, now in its second year, was one of the highlighted activities in 2015 to celebrate the International Year of Soils.

The students competed both as individuals and as teams. In the individual competitions, one member of Team USA, Kristen Pegues of Auburn, won the top award at the contest. Bush, who is also a member of the K-State soil judging team, was the 4th high individual at the international contest. Among the team competitions, Team USA took second. Taking both individual and team scores into consideration, Team USA finished first.

Scoring high as an individual and as a team in international competition was an achievement to remember, Bush said.

“I was so proud to be representing my country and Kansas State University at this contest. Many of the very best students in soil science from around the world were competing, and I was fortunate to have been trained so well for this at K-State,” Bush said.

Beyond the winning, the contest itself was a valuable learning experience, she added.

“It was an incredible opportunity to go to Hungary, meet people from all over the world, and become exposed to soils that I have never seen before. I will always cherish this experience, and I know it will be valuable in my professional life after I complete my master’s,” she said.

The contest allowed students, researchers and people interested in soils from around the world to interact and experience the landscapes and soils of Hungary and the Danube Basin, according to Mickey Ransom, coach of the K-State soil judging team.

Students in the contest spent their first four days learning about the landscape and soils of Hungary. On the fifth day, the students were asked to describe, understand and interpret soil characteristics in the field. Participants described a series of contest profiles using basic field tools, selected standards and guidelines.

The winners were selected on their ability to correctly describe each soil, evaluate potential soil functions and interpret their capacity to perform under different land use and management practices.

The event followed the 1st International Soil Judging Contest held during the 20th World Congress of Soil Sciences in Jeju, Korea in June 2014.

More information on the International Year of Soils is available.

Congratulations to K-State's Soil Judging Team for another great showing. Our team won 2nd place in the "Overall Team" and 4th place in the "Group Judging" categories at the 2014 Region 5 Soil Judging Contest hosted by Iowa State University from September 29 through October 3.

Special individual kudos to John Bergkamp, junior from Garden Plain, who was 2nd high, and Jessica Barnett, senior from Belleville, who was 7th high individual in the contest.

Mickey Ransom is the team coach, assisted by Scott Dooley, senior in agronomy from Jewell.

The Soil Judging Team won second place overall last year and has qualified for the national competition 13 out of the last 14 years. They have also won the regional contest three out of the last five years.

The contests are an activity of the American Society of Agronomy and the Soil Science Society of America.